From The Tree of Life Blog 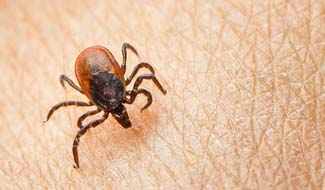 Spring has sprung, and so has tick activity. The month of May is Lyme Disease Awareness Month and because tick-borne infections are easy to get, yet hard to treat, we wanted to touch upon some of the basics, dispel some common myths and ensure you’re tacking proper precautions. We’ll also highlight some research that Bob Miller, Tree of Life founder, has been doing through his NutriGenetic Research Institute regarding genetics and Lyme disease. (link to http://www.nutrigeneticresearch.org/)

Our home state of Pennsylvania has led the country for the past six years with the most new cases of Lyme disease. However, Lyme disease is not just an east coast issue…it is a worldwide issue. And it’s not just an issue about Lyme disease. Ticks can carry more than a dozen other infectious pathogens, including: Anaplasmosis, Babesiosis, Borrelia mayonii, Colorado tick fever, Ehrlichiosis, Powassan disease, Rocky Mountain spotted fever, Tularemia and Rickettsiosis

Lyme disease is a bacterial infection contracted primarily through the bite of a deer tick/black-legged tick, lone star tick and dog tick. The Lyme Disease Association of Southeastern Pennsylvania, Inc. (www.LymePa.org) also reports that some researchers believe that other ticks and some biting insects such as mosquitoes, fleas, biting flies, and lice may also transmit Lyme disease.

Lyme disease has been called the great imitator and should be considered in the differential diagnosis of rheumatologic and neurologic conditions, as well as Chronic Fatigue Syndrome, Fibromyalgia, Somatization Disorder and any difficult-to-diagnose multi-system illness.  The onset of Lyme disease symptoms can be easily mistaken for other illnesses. Once symptoms are more evident the disease may have already entered the central nervous system, and could be harder to cure.

Lymedisease.org offers several compiled lists of symptoms that you can reference.

Don’t forget to check your symptoms against co-infections too. This comprehensive list shows 21 co-infections and their related symptomology.

According to many experts, there are no reliable tests for Lyme disease. Instead of solely relying on tests, doctors need to base a diagnosis on your symptoms, medical history, and exposure to ticks (often referred to as a clinical diagnosis).

If you believe you’ve been bitten by a tick, you can take a short questionnaire developed by Lyme disease expert Dr. Richard Horowitz to determine your likelihood of having Lyme and associated tick-borne disorders. Take the questionnaire.

Disclaimer:  The Horowitz Lyme-MSIDS Questionnaire is not intended to replace the advice of your own physician or other medical professional. You should consult a medical professional in matters relating to health, and individuals are solely responsible for their own health care decisions regarding the use of this questionnaire. It is intended for informational purposes only and not for self-treatment or diagnosis.

Testing the Tick Itself

Another step to take is testing the tick itself, which tests the tick’s DNA for tick-borne infections. The following are just a few resources for tick testing.

Because there’s limited research on Lyme disease, there are a lot of myths and misinformation around in the mainstream. PA Lyme Resource Network (www.PAlyme.org) has complied scientific evidence to help dispel some of those myths under its “Resources” tab.

ILADS.org indicates that up to 50% of ticks in Lyme-endemic areas are infected. Here in Pennsylvania, the causative agent of Lyme disease was found in ticks in all 67 counties.

What to do if you get bitten by a tick? The CDC recommends the following for removing a tick…

Click here for an article on ILADS.org from a Lyme literate medical doctor about removing a tick and recommended treatment considerations based on ILADS treatment guidelines. Link www.ilads.org/lyme/what-to-do-if-bit-by-tick.php

Read more about these research studies.

Watch a video that highlights findings from the first study.

Watch the ““Lyme disease – are your genes making you ill?” seminar that Bob presented to Nordic Network for Vector-borne Diseases (NorVect) in Oslo, Norway.

For more information on Lyme disease, Tree of Life recommends the following websites:

www.PALyme.org (includes lists of regional local support groups across the state of Pennsylvania)

If you’re looking for a Lyme Literate Medical Doctor, www.ILADS.org has a referral program as does www.PALyme.org for physicians within the state of Pennsylvania and neighboring states.

Tree of Life does not diagnose or treat Lyme disease; for this, you must see a licensed medical doctor. However, we do provide complementary nutritional support for those challenged with Lyme.

From the Tree of Life Blog

Subscribe to receive our
blog and latest news!
To speak with a Tree Of Life team
member, please call 717-733-2003.

Ready to get started?

All contents © 2020 Tree of Life. All rights reserved. Site by Stratega Marketing & One Sky Media